Spotlight on STI’s Commitment to Excellence

At exactly 5:30pm, on May 5, 2015, Sergeant-at-Arms, Brian Murphy brought the gavel (or was it a meat cleaver?) down on the first ever Triple S Toastmaster meeting, as we silenced our phones and rose for the Pledge. Club President, John Zalepka who was also the meeting’s Toastmaster (proving you can wear many hats at a Toastmaster’s meeting… although NOT his authentic Mexican sombrero because his mom sold it for a cool Hamilton), chose Cinco de Mayo as the “obvious” theme. Chips and dip were served and off we went………

Our Lexicologist Karen Bolger gave us a word that was not too common, but yet not too difficult to incorporate into our lexicon, that being NEFARIOUS. Diana Rosario gave an inspirational quote and Jim Diverio was the Joke Master… was he funny? I’m a frayed knot.

Our first speaker was Catherine Clif 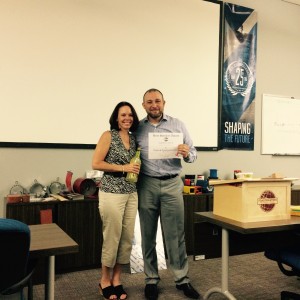 ford (from our electrical rep firm, Burgoyne Sales). She gave her Ice Breaker speech, “Tolerance & Triumph”. A story of how Catherine’s entire family has had to overcome the obstacles that her son Kevin’s battle with Tourette’s syndrome has thrown their way. This speech was well delivered and well received as Catherine earned the evening’s BEST SPEAKER AWARD (and margarita mix)… For more information about Tourette’s you can visit http://www.tsa-usa.org/.

Our second speaker spoke of his love and passion of all things hockey in general and the New Jersey Devils in particular. Corey Chess delivered his Ice Breaker “Slapshot!” in true fear-the-beard fashion, telling us in no uncertain terms that he is really a Mighty Ducks fan deep down… Quack! Quack! Quack! Quack! GOOOOOOO DUCKS!

Our third speaker went rouge jumping all the way to project #8, Getting Comfortable with Visual Aids… that’s right folks project #8, he’s that good! Brian Murphy broke down for us what makes for engaging design, in his speech “The Basics of Design”. Who knew that David Lauer’s Design Basics could be “life changing”?

Our final prepared speech was another Ice Breaker given by Karen Bolger. She spoke about researching her family’s roots over the past year, sharing some of the findings of her genealogical journey. “My Genealogical Journey” was a journey through some of the navigation of www.ancestery.com, information that the group found useful.

All of our speakers earned a special FIRST TIMER AWARD… thank you for stepping up Catherine, Corey, Brian & Karen!

An extra special THANK YOU to Diana Rosario for taking over Table Topics duties at the 11th hour. With the assistance of Janice Buffalow’s gift Table Talk card set, all we needed were some volunteers for impromptu speaking. First up was Corey Chess who spoke of water balloons and laughing so hard he was crying. Next was Catherine Clifford who t

ook us back to the 1980’s with her description of the tube top/headband/skirt combo. The final speaker talked about recording one moment in his life he could replay over and over again; John Zalepka went all soft on the group and shared a very intimate proposal with his bride-to-be… good enough for BEST TABLE TOPICS SPEAKER AWARD (and taco shells) (go me!).

The Evaluation Program was led by General Evaluator, Brian Hengstenberger. This part of the program gave

us the chance to offer verbal and written evaluations of the speeches this evening. The evaluation team consisted of Speech Evaluators, (Ash Sawant, David Samuel, Brian Hengstenberger & Bernadette Bautista-Guerrero) the Grammarian (Steve Harm), the Ah Counter (David Vail) and the Timer (Bernadette Smith). The winner of BEST EVALUATOR (and Cholula hot sauce) for the evening went to Ash Sawant, who gave some very good feedback on a very good speech, not an easy thing to do… excellent job!

Overall the meeting was a huge success and is living proof of STI’s Commitment to Excellence and just another reason why I love working here. I look forward to our next meeting on June 2nd!